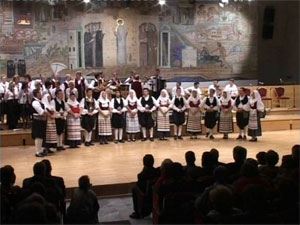 In spite the fact that the large, urban centres of the Crete inevitably lead the pace of a modern, technocratic and cosmopolitan way of life, they still preserve those elements which constitute the cultural physiognomy of Cretan folk traditions.

The holidays and the festivals, the daily activities and the rich artistic production in traditional sectors of creation are what bond the modern Cretan with the past and his heritage.

The majority of the inhabitants of Crete, particularly those who live in towns and in villages of the inland, upholds customs and traditions.

In the countryside and mainly in the semi mountainous and mountainous villages one will encounter even in our day and age many old Cretan men wearing the traditional costume (stivania [special boots], kilotes [special trousers], black men's shirts and the fringed head kerchief).

On the other hand, the Cretan women no longer wear traditional clothes although the older generations persist in wearing black and covering their heads with a kerchief. Here, tight bonds between family and relatives, time honored traditions, music and songs are still preserved, more so than in any other region of Greece.

The violi [violin], the lyra [lyre] and the laouto [lute] remain the characteristic musical instruments, the Cretan dances, the most popular being the local Sirto of Chania (it was played and danced to for the first time in Lousakies of Kisamos), are still danced at every opportunity and the "mandinades" and the "rizitika" songs resound in every celebration.

Traditional professions have withstood the test of time. One might observe the farmer use the same methods of cultivation as were used in previous centuries, the stock breeder making cheese products using the same simple - but effective - apparatuses, the cobbler, and the pewter. 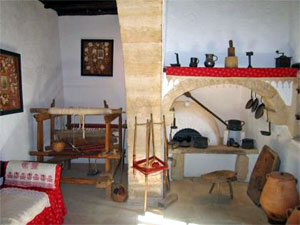 Folklore museums like that of Gavalohori and Lousakies as well as the local collections have salvaged and amassed a large number of antiquated items from the agricultural as well as urban life of a period which has come to an end.

On a daily basis, cultural societies and agro-touristic cooperatives made up of women from various municipalities and villages revive customs relevant to either Cretan traditional cuisine or the art of handicrafts such as knitting, embroidering, weaving and looming.

The art of pottery and woodcarving flourish as well as that of knife making with some exceptional "maherathika" (knife shops).

There is an ongoing struggle in Crete to preserve heritage and to adapt it to our contemporary life preventing it from fading and becoming extinct.

The journey ahead is long and arduous but the strength and the perseverance of the Cretan seems capable of overcoming any obstacle.