Carefully made suggestions about ideal sandy beaches with crystal blue waters, historic sights that worth paying a visit, recreational activities for the whole family, the most well known entertainment 'spots' in the area and anything you might need to know for unforgettable holidays in Crete.

To the southwest coast of Crete lies one of the most magical beaches. Elafonisi is one of the most exotic beaches of Crete, situated about 80 km from Chania, is characterized by dunes of white sand, crystal clear shallow waters, tranquility and peace that it offers. The landscape refers to exotic beaches and shallow waters often continue for several meters into the sea. The landscape in Elafonissi riveting as it is rare to meet in Greece beach with its own characteristics. To get to Elafonissi you can take the bus or better by renting a car. Surely your visit to the beautiful beach Elafonissi will be unforgettable! After a few minutes' walk to the west you can easily reach the beach and the Cedar forest. 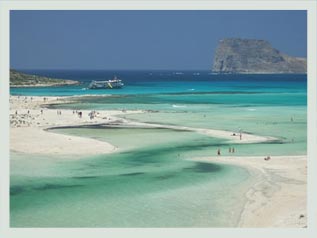 To the northwest of Crete is Gramvoùsa. It is a peninsula in the west of which lies the beautiful beach of Balos. In the peninsula of Gramvousa is a castle which was built by the Venetians and was used as a fortress against the conquerors who occasionally want to trespass. Eventually the Turks managed to conquer the castle bribing the Venetian commander! Balos beach is one of the most beautiful beaches in the Mediterranean. Very fine white and red sand, shallow waters and at some point a lagoon with crystal clear turquoise waters. To reach this Gramvousa and Balos beach, you can get one of the boats that starting every day from the port of Kissamos (Kastelli). Balos beach is accessible by land. Following a hard drive dirt road until you reach a specific point, and from there will begins the descent on foot, a chance to see many of the beauty of the Cretan Island.. 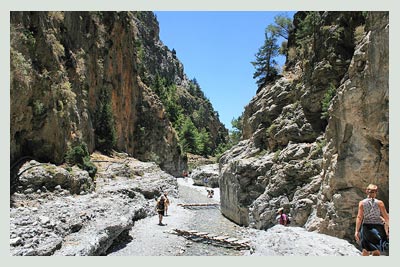 The Samaria Gorge Farranga or as the locals call it, is located 43 km south of Chania. The entrance of the gorge is situated at an altitude Xyloskalo 1227 meters. H Xyloskalo position took its name from a wooden ladder that was there again and facilitated the descent into the canyon. Also in this area (just before Xyloskalo) is a small road which leads to the ski resort in Kallergis 1680 meters in altitude. The descent of the gorge begins Xyloskalo, with steps at the beginning and then a small path. The descent is quite difficult and takes 6 to 8 hours. Those who intend to cross the gorge should wear athletic shoes and hat. Water does not need it during the journey there taps. The gorge was declared a National Park to protect the rare flora and fauna and especially the Cretan wild goat (kri - kri, as the locals call it) who lives here. Recently, Samaria was awarded by the Council of Europe as one of the most pristine and beautiful natural areas of the old continent. Sources are abundant in FarangiKonta the entrance is the chapel of St. Nicholas, surrounded by trees and water sources olodrosero. Here believed that there was an ancient temple of Apollo and a short distance of the ancient city "Kaino." Half way is the old village of Samaria, who abandoned a few years after the proclamation of the gorge as a National Park (1962).. 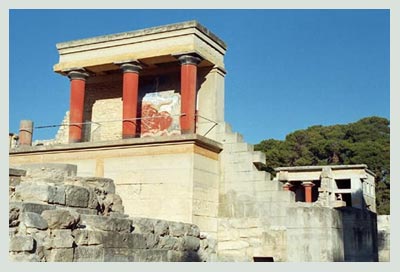 With large excavations made in Heraklion Crete at the late 19th century and later came to the surface of the ground the remains of a phenomenal civilization, The Minoan civilization which is the first high civilization in Europe in about the years 2800 to 1000 BC. The Arthur Evans, the English archeologist of Knossos, named this culture Minoans, the name comes from the famous King Minos. After the excavations have exposed in the middle of the site of Minoan the actual palace of King Minos rich deposits, the royal apartments to religious sites, the huge central courtyard and finally the throne room where they discovered the "throne Minos, "The throne of King Minoas is the oldest in Europe". In the third millennium (somewhere between 2800 and 2600 BC) in Crete starts a new era, the Bronze Age, characterized by the manufacture of copper and widespread use of metals. The Minoans are known from the paintings, where we see the virtual image, and their works, where we admire their skills. Anthropological classified by some researchers in the Mediterranean race, which typically is the small stature, black hair and eyes.

The monastery of Arcady is located about 70 kilometers from Rethymnon city and has a great history related to the Cretan revolution in 1866. When the monastery was build was just not accurate. It is said that according to tradition founded by Heraclitus and rebuilt by the Byzantine emperor Arcadius in the 5th century from whom it took its name. The monastery was founded by a monk Arcadius so it took the name "Arkadi monastery". The Remains, however, are kept in the northwestern part of the enclosure. There is a story, which certifies that the original temple was dedicated to Saint Constantine. What is said by some travelers that the name of the monastery comes from the ancient city of Arcadia in Crete is wrong. Because this city was too far away from the area that the monastery of Arkadi builded. At the end of the 16th century (1587) was a renovation of the monastery and was built in the same position as in today. There is a museum inside the monastery with collections from Byzantine. In the main area there is dedicatory construction dedicated to the Cretan people who fight and died in this place. 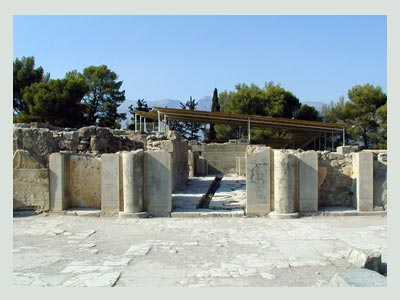 Phaistos was the second largest city of Crete in 2000 BC, after Knossos, and is now an important archaeological site. Located about 62 km southwest of Heraklion, Crete, south of the river of Geropotamos. Built on a low hill at an altitude of 100 m above sea level, surrounded by towering mountains of Psiloritis and Asterousia the Lasithiotikon mountains, while a short distance away is the town Tympaki. East and north of Phaistos is the Lithaios, where the inhabitants were supplied with water. Many authors have reported ancient Phaistos. The first mention of Phaistos is in Homer's Iliad and Odyssey, indicating the involvement of Phaistos in the war of Troy and describes as a "well populated" city. The ancient historian Diodorus Siculus attributes the foundation of Phaistos, and Knossos and Cydonia, to Minos. Information about the history of the ancient city came to light after Italian archaeological excavations. The name is pre-Greek and signs of Knossos Linear B is Paito (attic type Phaistos) and the etymology is from F (F) = tissue brilliant, glorious. It is one of the 3 significant cities created by Minos and was the second most vital center of Minoan civilization era. According to mythology, Phaistos reign in the dynasty founded by Rodamanthys, son of Zeus and brother of Minos. Phaistos was inhabited since the Neolithic era and prospered enormously in the mid third millennium BC, the Bronze Age.. 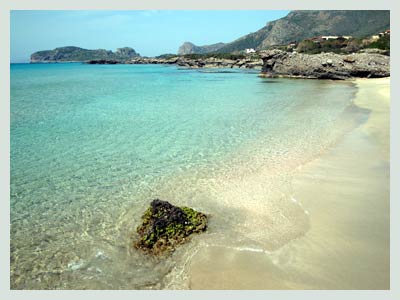 17 km from Kissamos (Kastelli) to the northwest of Crete, is the beautiful beach of Falassarna. This is one of the cleanest beaches in Crete with crystal waters and has several times awarded as the best beach in Greece and one of the best in Europe! The white and red sand and the views of the majestic mountains that surround, make Falasarna as one of the must visit if you visit the site. In Falassarna are the old town and harbor, as are other beautiful beaches. You can lay on the beach with your own beach towel or rent an umbrella. Try not to miss the sunset is unique and magical. There are some taverns and nice accommodation to eat and stay. To reach Falasarna follow the road connecting Chania to Kastelli and before the village Platanos, turn right. Public transport is limited in this area of Crete so try to hire a car for exploring 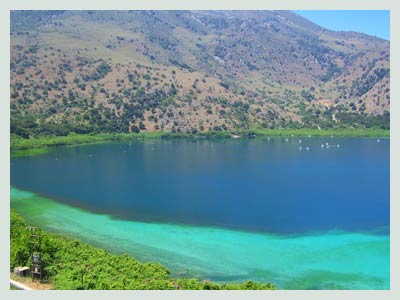 Lake Kournas, a painting adorns the prefecture of Chania. The only natural lake of Crete, is located 30 km from Chania near the borders with Rethymnon, between hills, a great destination for winter and summer. Its name derives from the Arabic word which means Kournas baths or haunted lake ... and that's common for a lake ... The legend tells of a blonde girl who many years ago in an attempt to save himself from the sexual appetites of her father wished the whole region to sink and become a lake. As it happened ... and then ... they tell stories of a young woman sometimes makes its appearance of sitting on a rock in the lake and combing her blond hair. In modern times ... the lake has an important habitat. The banks are green and white sand in them, makes it ideal for swimming and sunbathing. You can also rent paddle boats or canoes for a romantic time in the lake. The shores of Lake Kournas know major tourist development. Tourists who visit can enjoy views of the lake along with Cretan delicacies at the many shops that operate in the region. Nearby, at the beginning of Rethymnon are the sources of Argyroupolis. A green oasis with running water. Their sound, are the ultimate soothing sound. light a candle in the chapel of the Holy Force, located within a rock, try and follow one of the many beautiful trails routes. This exercise opens the appetite. Do not worry, you will find several restaurants in the area. Then you can visit the village of Argyroupolis, built on the ruins of ancient Lappa, a large Doric and Roman city.